The Silver Kings Have Returned!!

It is early in the morning on a typical hot, humid North Carolina summer day. What better place to be than out on the river with a boat loaded with tackle ready to take on speckled trout, flounder, maybe even an old drum.
As you head out, the water is calm, and pods of large menhaden are flipping on the surface. For as far as you can see, the schools of bait are breaking the surface. You see some spanish mackerel excitedly knifing through the pogies, cutting out an early morning snack. As you watch, something different catches your eye. A large fish rolls on the surface, then another, and another…

It looks like a tarpon, a silver king!! But that can’t be, they haven’t been in the river in decent numbers in almost a decade. So you cut the motor and watch, scanning the middle of the river for another glimpse of them. After a couple of minutes, it happens again. Big, silver backs breaching the surface, it IS a school of tarpon, and they are BIG!!
It has been years since these fish have made an appearance in the Neuse like this, and as you scramble to get set to catch them, you wonder where they have been for so long. Was the salinity of the water too low? Not enough dissolved oxygen? Had we lost too much oyster reef? Did the lack of big bait schools keep them away? For the moment, none of that matters, it is time to catch one!! 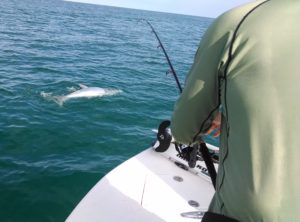 Tarpon fishing on the Neuse River in and around Oriental is a different game. The fish are rarely tempted or tricked by any artificial lure or fly. To catch them, you have to soak bait on the bottom. A live small spot or croaker is candy to them (and will minimize the need to crank up the sting rays that are always around to snack on cut bait). You know you are set up in the right spot, as the water is covered in a slick of crushed menhaden, and the air on the river is thick with the smell of bait oil. Hopefully, it is just a matter of time before you hook up and get to experience that world renowned hour long, drag screaming battle with a legendary fish. 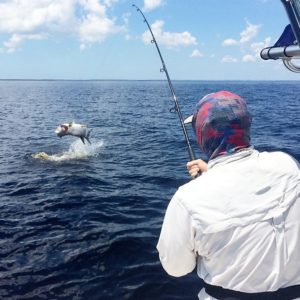 If you want to increase your chances at having a shot with a tarpon, Oriental has a stable of world-class guides that would love to give you an adventure of a lifetime, and links to them are listed below.
Captain Mitch Blake — Fish IBX
Captain Gary Dubiel — Spec Fever Guide Service
Captain Bobby Brewer — Bald Headed Bobby Guide Service
Captain George Beckwith — Down East Guide Services
Captain Dave Stewart — Knee Deep Custom Charters
Captain Ashley King — Keep Castin’ Charters

Laurent Berthet
12:43 26 Jul 19
If I must to choice a place to stay the rest of life, it’s here... Place is beautiful,people of the office very friendly and all the people crossed was with a large smile. The rooms clean like new, with nice paintings on walls,large windows with front sea vue.Hard to leave this morning. On four thousands miles it’s with no contest my favor place. So I’m to stay four nights...For sure I’d like to come again. Thanks for all.....

Shanelle
21:49 25 Feb 19
Perfect service and a very relaxed and clean atmosphere.If you ever want to get away and feel young again, please come here and take a load off.This was definitely worth the trip.I love the view..the room..and the people hereCome here for PEACE!:)