The Gravy Boys are Coming to Oriental NC

frontdesk Posted on June 13, 2013 Posted in News & Events No Comments

Next Saturday, June 22nd, The Gravy Boys will perform in concert in Oriental, NC.  The concert is free and open to the public so bring a blanket or lawn chair and come on down!  The waterfront concert will be held in Lou-Mac Park, a picturesque waterfront park which is located just across the street from our hotel here in Oriental, North Carolina.

The Gravy Boys, who hail from Raleigh, are an Acoustic Americana Band whose musical roots are firmly planted in the ground of America’s musical heritage.  With their solid musicianship and tight vocals, The Gravy Boys deliver a high energy, foot stomping performance.

The Gravy Boys have released several CD’s; the latest is titled Crackerjack Whistle.  Tracks can be heard and CD’s purchased on their website www.gravyboys.com.  The Gravy Boys have played all over the area and have even played the renowned MerleFest. 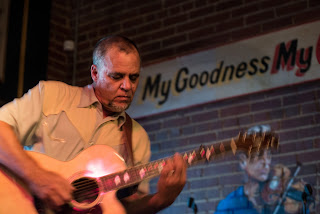 Steve Storms from The Gravy Boys at a Recent Performance

Laurent Berthet
12:43 26 Jul 19
If I must to choice a place to stay the rest of life, it’s here... Place is beautiful,people of the office very friendly and all the people crossed was with a large smile. The rooms clean like new, with nice paintings on walls,large windows with front sea vue. Hard to leave this morning. On four thousands miles it’s with no contest my favor place. So I’m to stay four nights... For sure I’d like to come again. Thanks for all.....

Shanelle
21:49 25 Feb 19
Perfect service and a very relaxed and clean atmosphere.If you ever want to get away and feel young again, please come here and take a load off.This was definitely worth the trip.I love the view..the room..and the people here Come here for PEACE!:)